By Bronwyn Barry, NAPHN Board Chair

A record number of callers showed up at a public hearing hosted by California’s Energy Commission (CEC) last week to review another application for electrification reach code by four small Californian cities. Their applications followed 39 other cities who have already adopted similar local ordinances to override California’s Title 24, Part Six, Energy Code. This unprecedented push to override the existing energy code has emboldened me to finally start speaking up about the deep flaws and fault lines embedded in California’s energy code, and expose it for the sclerotic, 70’s relic that is – not the leader we’ve been sold – and is itself the albatross that is holding back the decarbonization of our industry and our built environment. 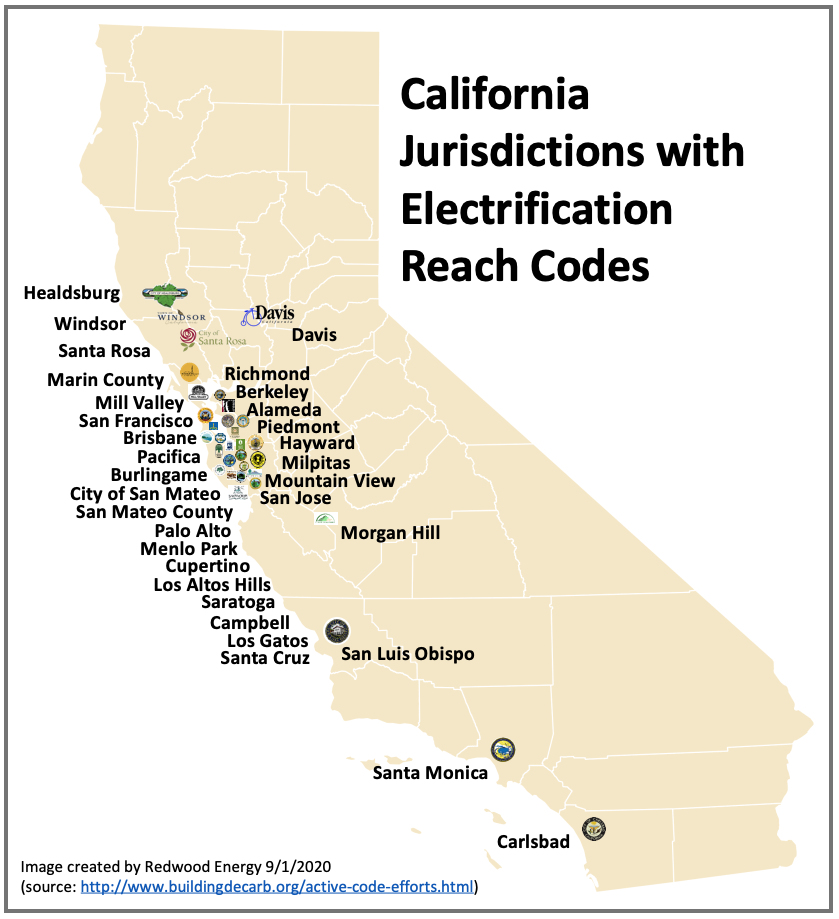 Those of you who know me are aware that I’ve been designing and building super-high performance projects in California for more than a decade. Over and over again, I’ve found that my required Title 24 energy modeling reports have been completely useless, unhelpful, and have routinely PENALIZED specific elements of my projects for doing the right thing. This fact has been verified by measured performance data collected on my projects, by myself and the Department of Energy, and confirmed by this award.

I’ll start with the small, 750 square foot Accessory Dwelling Unit (ADU) I designed in 2018 for clients in Palo Alto, under the 2016 energy code as my first example of the dysfunctional disconnect between our code and our State’s greenhouse gas emissions targets: 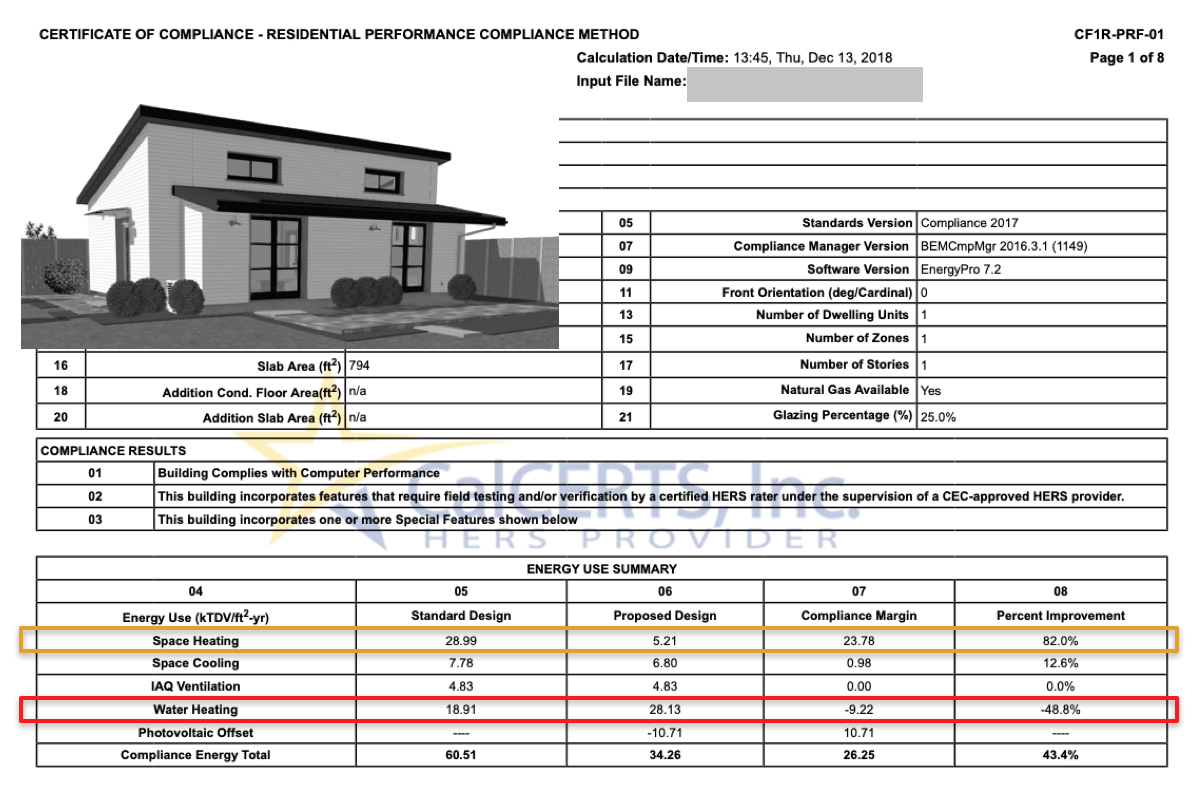 As with every building I’ve designed since 2013, it’s an all-electric building. I specified a new heat pump water heater for the main residence and connected the ADU to this same unit to maximize efficiency and reduce costs for both buildings. The building is also designed to Passive House standards (which was easy to meet by adding a little extra insulation to the walls.) When I had the mandatory T-24 energy model run, my consultant found that I wasn’t allowed to take credit for sharing the water heater with the main residence. This generated a PENALTY of -48%. Had I not designed the envelope to meet Passive House standards, this would likely have been a major problem for this particular project. It would have been forced to revert to using a gas water heater attached to the ADU, locking this project into a fossil fuel grid for another decade (or longer.) And many other ADU designers are currently being forced into the same corner…and don’t have the benefit of knowing a way out.

This wasn’t my only challenge with this project’s Title 24 report. If you look closer, you will note that I received NO CREDIT for installing a balanced, heat recovery ventilation unit. (This was pre-Covid, but we had already experienced two summers of wildfire smoke, making filtered indoor air supply a necessity, even if you weren’t trying to meet Passive House targets.) Fortunately the bulk of my otherwise exemplary compliance points were allocated to the heat pump air handler that provides heating and cooling, which meant I was easily able to absorb the massive penalty given to the detached heat pump water heater. Fortunately because of my PHPP energy model outputs, I also knew that I was making the right choice. 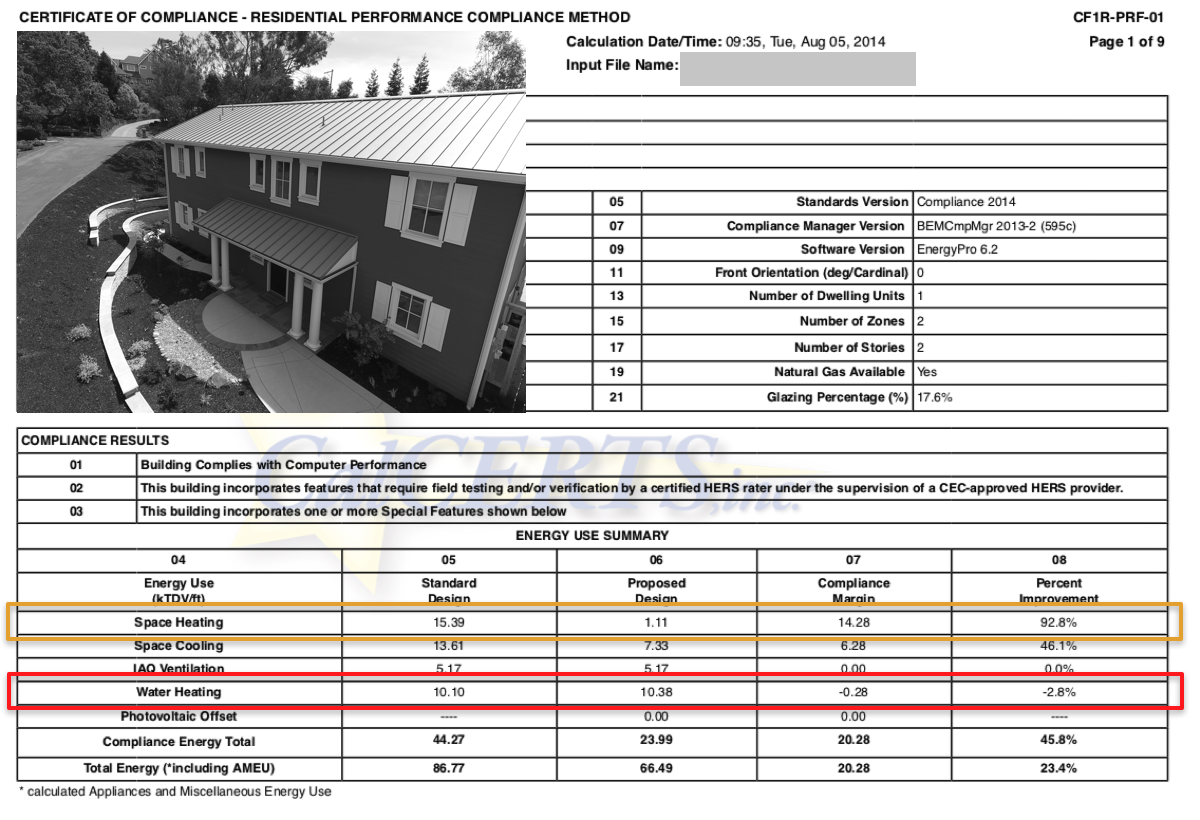 Another project completed a while back under the 2013 code, tells a similar story of the disconnect between the title 24 energy model outputs and those generated by an alternate model. Despite this example using an old code version, it’s instructive to share because this was the time when we could already see that electrification was more cost-effective in the field. Again, my energy compliance report proved completely useless. Its outputs showing ‘percentage better than’ compliance margins didn’t offer any useful information about the predicted energy use of this home. They therefore couldn’t be used to verify actual measured performance. Again, the specified heat pump water heater was penalized (this time only by -2%) and again the exemplary ventilation system installed received zero credit. The point I’m illustrating here is that our energy code is not built to enable early signals to be transmitted to the market. This in turn prevents the market from naturally gravitating towards the solutions we should be implementing, and is the net result of cities now having to apply to override the existing energy code, as we’re seeing now happen.

In direct contrast, my Passive House Planning Package (PHPP) – the preferred energy model I’ve used to design my projects since 2011, shows both useful and accurate results. For this home, the actual performance and the estimated performance provided by my PHPP were almost exactly the same. This is the sort of transparent feedback loop we should be encouraging, where the energy model being used in the field connects directly to the actual design, rather than a meaningless reference building (which is what the CEC’s model uses.) 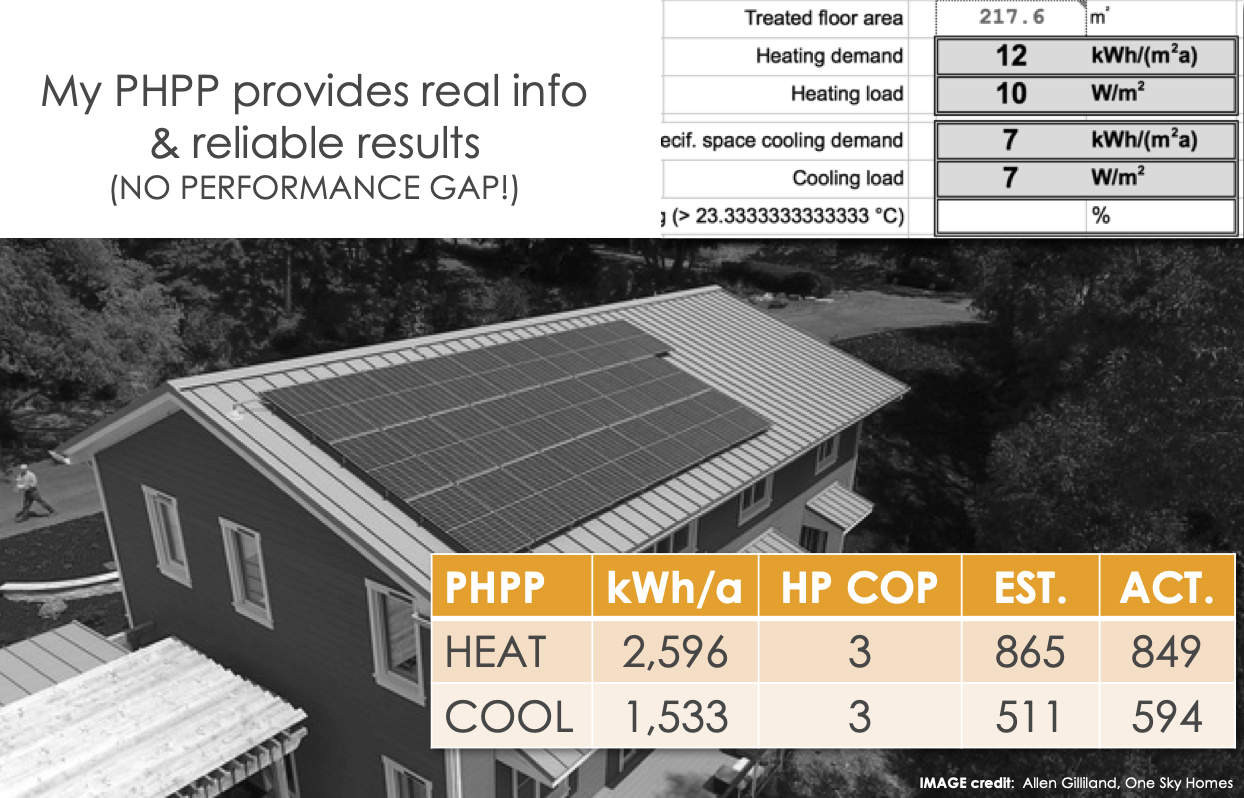 My last example is a more recent retrofit. These clients came to me, asking for their already permitted drawings to be revised because the drafter they initially hired hadn’t included any high performance features in his plans. He had specified all-gas, conventional heating, cooling, hot water systems and appliances, trapping this ‘renewed’ building into an old fuel grid. Once I revised their plans, I was able to transform the same building into a highly efficient, low-energy, all-electric beauty. The assumption should have been that in 2019 I should have received a much better rating via the Title-24 report. Unfortunately this was NOT THE CASE!

The image below shows the before and ‘after’ Title 24 reports. Shockingly my superior performance, all-electric design was made to look MUCH WORSE than the originally proposed, code-compliant gas guzzler. Here again, the energy code was sending the WRONG SIGNAL to the market. Only because of my years of seeing the same misguided results from these reports did I know that I could – and SHOULD COMPLETELY IGNORE THESE TITLE 24 RESULTS!

(As a regulatory code framework that is supposed to guide the market – that’s madness.) 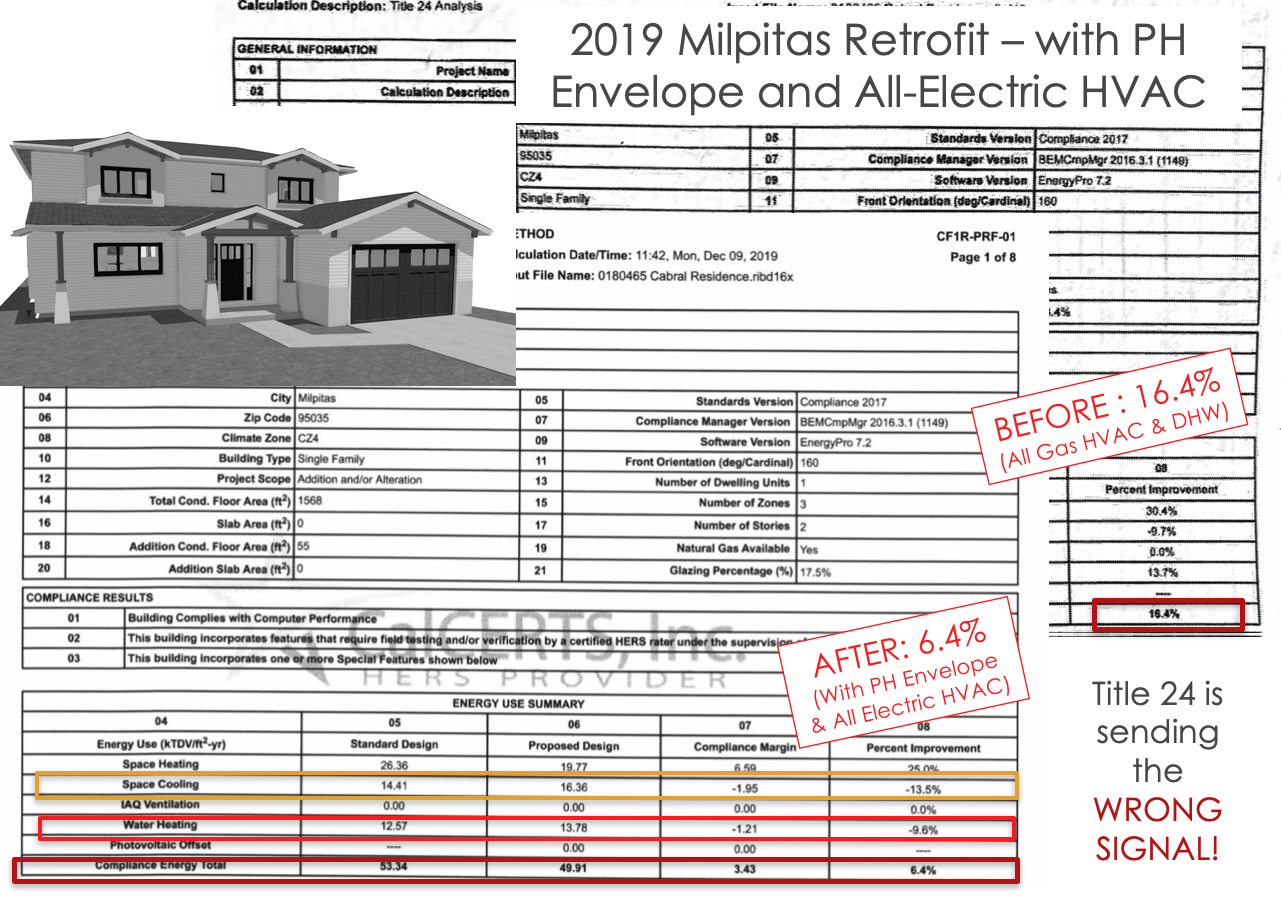 Figure 5: Milpitas residence CF1R-01 report, showing ‘before’ electrification and ‘after’ electrification results, with conflicting messages being sent to the market on which is the lowest GHG emissions solution. Project by PassiveHouseBB. Credit: author.

So what does this all mean and are these simply isolated errors? (Tragically they are not.) More importantly, how is this connected to California’s wave of electrification reach codes and will this affect California’s ability to meet our Greenhouse gas emissions reductions targets for the built environment? The answers to those questions (like anything worthwhile exploring) are complicated….

Let me start by stating that I’m fully aware that all of these projects were submitted under earlier, less optimized code cycles. The 2019 code does now allocate much better credit* to heat pumps than what I’ve shown here and it does now recognize and credit heat recovery ventilators.**  What I’m clearly illustrating here is that there is NO FORWARD SIGNALING CAPACITY built into our energy code framework. (Why else is every city in California only now requiring special permission for electrification reach codes when it was already cost effective in 2013?) The bald reality is that our energy code simply isn’t designed or built to direct our market to where we need/want it to go. In a fast-changing world, where technology advancements are outpacing the code cycles, THAT’S A REAL PROBLEM (not to mention the increasingly alarming climate crisis.)

What’s more confounding is that many policymakers appear blissfully unaware of this massive disconnect between our energy code and our GHG emissions reduction targets. They have drunk the Kool-Aid that “California’s energy code is a leader.” I have shown you here that California’s Title 24, part 6 energy code most tragically and most definitely IS NOT A LEADER.

On the plus side, I must recognize that the CEC has done it’s best to move things forward. They are fully aware that their reference building energy model is deeply flawed, but are shackled by a legal framework that makes shifting away from their existing protocols and energy modeling tools very difficult.*** Many entities have lobbied over the years for them to switch to a performance-based code, linked to an energy model that isn’t tied to a reference building.

So what can we do about this problem with our energy code?

Some solutions are simple:

“regulations are only created after problems have become serious, widespread and persistent enough to demand official action.”

“A man dies when he refuses to take a stand for that which is true.” — Dr Martin Luther King Jr

This woman chooses to sit down and write a series of blog posts.

* This credit is still not commensurate with the GHG benefits, as gas appliances are still allowed.

* *  ‘Rabbit hole’ alert: This is a function of how the recovery efficiency of heat recovery ventilators is measured and tested and is another disconnect within the industry that performs these tests. (It requires a separate dissertation to unpack.)

*** The Warren-Alquist Act limits the CEC’s ability to include new measures and products. It requires historic cost-benefit analysis methods that don’t allow predictive cost reductions normally seen as market share and demand increases, thereby slowing down the adoption of new products and technology used in the construction industry.